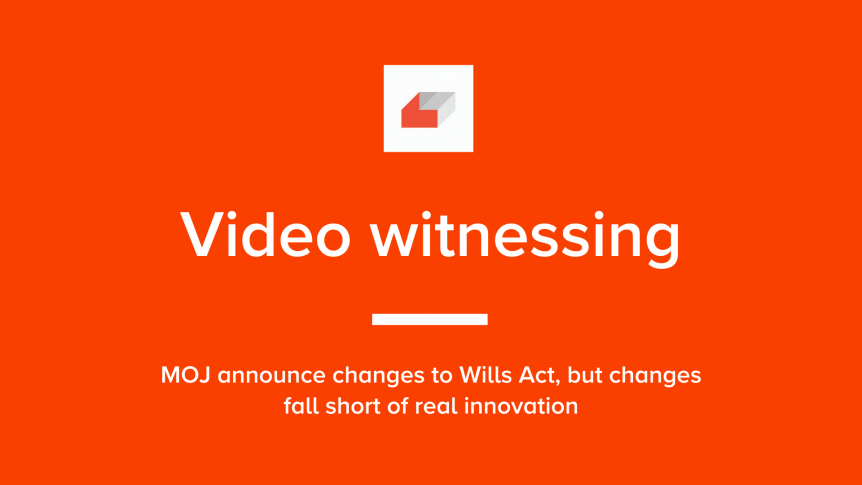 There is a clue about how quickly things change in the Will writing industry in the name of the law that governs it. The Wills Act 1837 is near approaching is double centenary and has changed little over time, despite the fact that social structure and behaviour has changed radically since then.

The Law Commission have been reviewing the law for some time, because they realise it needs to be brought up to date, particularly in a few areas:

The last point has been an area of contention. Many people are already making their Wills with the use of computer technology, whether they know it or not. Online Will services are becoming increasingly popular, and even traditional law firms are increasingly using LawTech to help draft Wills.

However the big challenge has been around witnessing. To comply with the Wills Act (1837), the Will is only valid if it has been signed in writing in the presence of two witnesses. Case law says there needs to be a clear line of sight between the witness and the person signing the Will – and that is interpreted as being physically in the same place.

But the COVID-19 pandemic has made physical witnessing of Wills difficult at a time when there has been a surge in demand for writing them. Especially among older people who are more likely to be at risk and therefore shielding from outside contact.

This has led to innovative physical witnessing, such as signing on the windscreen of a car or through an outside window. But many people have turned to the use of technology, by witnessing over a video call such as Zoom or Facetime.

The problem up to now is that this isn’t legal, and these Wills are potentially invalid.

At least that was the case, until the Ministry of Justice announced this week that an amendment will be made to the Wills Act, effective from 1st September, that will make it legal to witness a Will over video. This is to be backdated, so that any Will signed in this way since 1st January 2020 will also be valid.

This is welcome news among much of the sector, particularly those that have been urging the Law Commission to take a much longer term view and make sure the Wills Act is fit for the next 50 years, not just bringing it into the 21st Centrury.

However, many have concerns that this increases the risk for fraud and coercion and that it should be used as a last resort rather than become the norm.

There is helpful guidance on the gov.uk website about the new rules, although when read through in detail, the process for witnessing a Will by video is quite cumbersome and drawn out.

The law reform falls short of adding electronic witnessing to Wills, as they say it increases the chance of undue influence and fraud, but surely it is a matter of time before consumers demand this change to be made. It is possible to carry out many other legal and secure transactions using digital technology and it is not outside of the realms of technology to facilitate this in a way that makes it easier for consumers and safeguards their interests.

It is also only temporary, at least for now, and will be effective for the next two years.

Helping people to make Wills is a good thing, as is making sure they are protected at the same time.

We welcome the changes, but hope that this is the start of much wider reform of the law to help Will writing and legacy giving to thrive over the coming decades.