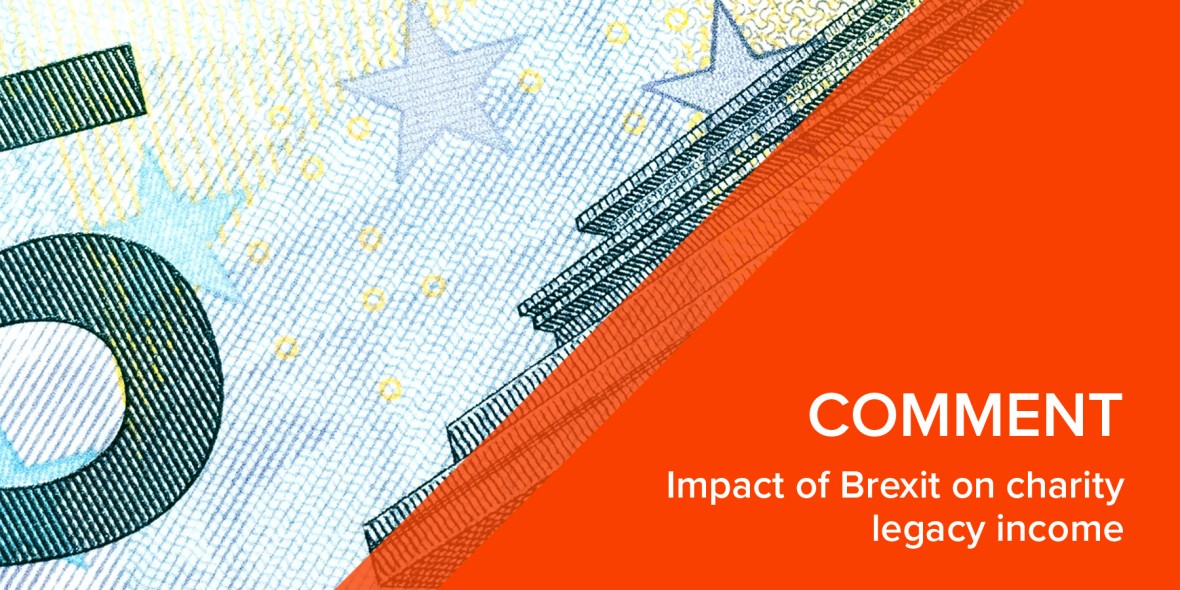 Six weeks on from Britain’s decision to leave the EU and are we any clearer on the impact Brexit will have on our charity sector? The second in a two-part blog series, we look at the medium and long term consequences of Britain leaving the EU on legacy income.

Legacy income plays a huge role in our charity sector, contributing an estimated £2.5bn annually through around 111,000 gifts (Charity Commission, 2014). It is the biggest contributor to voluntary income and can provide the bulk of some charities income – particularly for animal and health charities.

What might happen in the next 2-5 years will largely be dependent on the deal we strike with the EU and how consumers and businesses respond to this news. A recession would be bad for the legacy sector – we know in the aftermath of the financial collapse in 2007, legacy income reduced significantly and took years to recover. The same would be true if we enter another recession.

Whether we will or not is hard to tell. The catastrophic warnings of Brexit given by the Governor of the Bank of England, Mark Carney, have softened in his attempt to reassure the markets. Forecasts seem more certain that the UK economy will slow and growth expectations have been revised down, but as yet we don’t know to what extent.

It would be prudent for charities to place some caution in their 2-5 year forecasts and keep a careful eye on the performace of the economy.

Legacy Foresight have recently revised their mid term growth forecast down from 4% per annum to 2.5% as a result of the economic uncertainty caused by the Brexit vote. While the downgrading isn’t good news, it is important to state that we are still anticipating growth, and which is well above the current level of inflation. So charities must not be too concerned on this issue.

Assuming we ride any potential economic volatility and come out the other side, the long term projections of legacy growth remain. The scale of that growth will very much depend on the recovery of the economy and house prices, but the underlying drivers have not changed.

We know the numbers of legacy gifts have been growing at around 5% a year (Legacy Foresight) and this is despite a fall in the number of deaths in the UK. ONS projections suggest that the decline in death rate is slowing and will begin to rise over the next 20-30 years due to the Baby Boomer generation.

Attitudes to leaving a legacy to charity are changing, and more people are open minded about including a charitable gift in their Will. In fact, while just 7% of Wills that pass through probate have a gift to charity, we know that the proportion of over 60’s with a charitable Will is more like 15-20% (Remember a Charity). Furthermore, the population of people without children is growing, which is the biggest indicator of likelihood to leave a legacy to charity. In fact, around 20% of the over 60’s population are understood to be ‘childless by choice’, meaning a potential increase in the number of legacies in the future.

So, in the long term we expect more people to be dying and leaving a gift to charity, so the volumes of legacy gifts should continue to grow and quite strongly.

The value of these gifts will be influenced by not only the performance of the economy and house prices, but by wider factors. As people live longer, there may be more pressure on estates, such as paying for care, equity release, supporting adult children. So the overall values of estates may reduce. In addition, as people become more open to include gifts to charity, and more charities become active in this areas, we expect there to be a dilution effect in the overall value of legacy gifts, as the donations are shared among more charity causes.

The main way to ensure legacy income to your charity continues to increase over time is to continue to grow the market – encourage more of your supporters to consider leaving you a gift in their will and while values may reduce, the volume of gifts received should significantly outweigh this.

Going back to Remember a Charity’s mission, if we can encourage just 4% more of the population to leave a gift to charity in their Will, we can raise another £1bn for good causes.